THE O’NEILL: THE TRANSFORMATION OF MODERN AMERICAN THEATER – Jeffrey Sweet 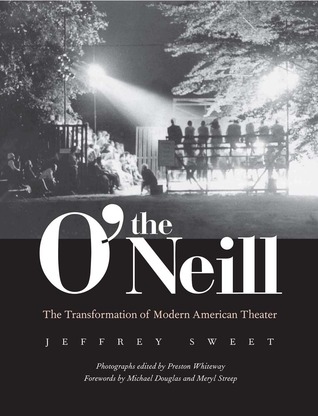 Having spent a good portion of my life working professionally in theatre, I was certainly familiar with the O’Neill Center, if only by name.  But having spent most of that career in the Midwest and West Coast, I’d never gotten closer than reading about the place in magazines and web sites.  Jeffrey Sweet manages to open the doors and make this institution a warm and inviting place.  I feel as though I’ve known everyone there and would be welcomed as an old friend.

Author Jeffrey Sweet takes us on a journey, exploring the foundation of The O’Neill, through the many and varied ways in which it has supported the arts, artists, and has been a springboard for other organizations.

I was hooked to Sweet’s writing, and to the information that would follow, with the opening in which Sweet associates what Citizen Kane did for movies and movie-making, The O’Neill did for theatre.

“…nobody who has come into the theatre since the Eugene O’Neill Theatre Center was founded can appreciate how thoroughly the American way of making theatre has changed in the past fifty years.”

Even for those readers who are familiar with the O’Neill Theatre Center and what it’s done for playwrights, it’s possible that many are not familiar with what it has done for puppetry, musical theatre, cabaret, international theatre exchanges, theatre criticism, National Theatre of the Deaf, and even independent films.  This book opens eyes just as the O’Neill opened many, many doors.

We learn about the people who built the theatre; those who created the environment that is conducive for creating art.  We also learn about some of those who benefitted from the O’Neill.  One the biggest stories is also a bittersweet story — playwright August Wilson, whose career was built with the strong assistance of the center’s Lloyd Richards, but who seemed to abandon the center for his own company (for which many believe his work suffered).

The O’Neill Center has survived hard economic times and a fluctuating political climate. Theatre companies have come and gone in these turbulent decades, but the fact that the O’Neill Center has survived, and thrived, is a testament not just to the center’s leaders, but to its ideals.  The Center is still helping to define American theatre by working with playwrights.

This book is a wonderful source of theatre history and a virtual Who’s Who of American Theatre over the last half century.  It is liberally supplied with photos from the Center’s archives.  Jeffrey Sweet manages to make the Center, and its history, accessible and, as mentioned at the top, inviting.  The goal, it would appear, for every theatre student should not necessarily be to get to Broadway, but to get to the O’Neill Center.

Looking for a good book?  Jeffrey Sweet’s The O’Neill is an important and accessible work of theatre history and a source of encouragement for anyone interested in the future of American theatre in general and playwriting in particular.  Highly recommended.

The O’Neill: The Transformation of Modern American Theater