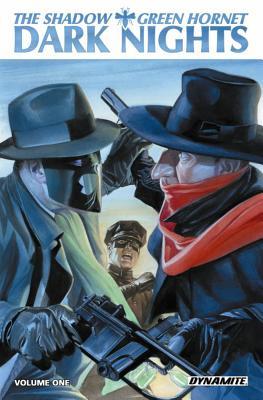 Not too long ago I really enjoyed the graphic novel Masks, which featured The Green Hornet and The Shadow, so I was looking forward to this book, featuring a match-up with these two, different, crime fighters again.  Unfortunately, this one didn’t have the magic that Masks had.

The Shadow and The Green Hornet are very similar masked crime fighters … both wealthy gentlemen in their daytime personas, bent on cleaning up the world, one criminal at a time.  Among their differences, however, is the fact that one won’t kill, and the other leaves behind a trail of bodies.  This could be an interesting team-up.  But instead of really working this obstacle in their partnership, the book instead chooses to show off the history knowledge of the author.

The story:  Shiwan Kan (The Shadow’s arch nemesis) is manipulating world politics in order to obtain a powerful artifact.  The world is on the verge of war, and Kan’s manipulations will likely push it over the brink.  President Hoover calls in Kent Allard/Lamont Cranston and Britt Reid, asking for their help, philanthropic and otherwise, and hints at knowing their alternate identities.  Laying out the problem, The Shadow and Green Hornet go in for the sting.

Along the way, Cranston and Reid are slightly side-tracked by love interests.  This attempt to root the heroes in romance is unnecessary and bogs the book down, even if slightly.  And Kato is subjected to racial profiling such as was common at the time.

It was evident throughout that the author, Michael Uslan, had done his research and even had a passion for World War II era history, and when the end of the book includes a page by page historical diagnosis of facts from the story, it became clear to me why the story never developed enough for me as a story.  The story was secondary to the history.  The action rarely seemed to build … it just skipped sideways, from moment to moment, grinding historical accuracy into each passage.  Even the ending was less a relief of built up tension and excitement and more just another moment.

Keith Burns’ art is fine.  It was suitably noir-dark, but like the story, didn’t excite me terribly either.

I really love the old pulp heroes and would choose to listen to an old Shadow radio show over just about anything else, today.  And unlike some other titles I’ve seen, at least our graphic novel team hasn’t destroyed who and what our characters are and how they operate within (and above) the law.  For this, I would give them another shot.  But purely on the entertainment value of this particular read, I am less than impressed.

One comment on “THE SHADOW/GREEN HORNET: DARK NIGHTS – graphic novel”