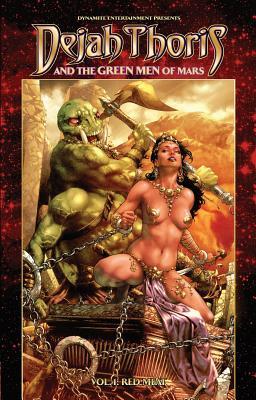 Let’s face it … sexy women in spacesuits, or chain mail, or flimsy faille, have long been a part of the sci-fi/fantasy landscape, and I would not deny that it was just as likely that I was first drawn to Burroughs’ Barsoom series by the sultry Frank Frazetta covers.  But I stayed with the series for the pulp adventure; for the stories.  The story here is extremely simple.  A Thark manages to kidnap Dejah (while John Carter wanders aimless wondering where she went) and plans to chop her in to little pieces to sell as red meat delicacy.  Dejah has to fight her own way free because Carter is clueless to the fact that she was kidnapped.  That’s it.  She’s threatened to be eaten.

Any attempt to look at this story as a feminist fighting for her own freedom, not needing John Carter to constantly come to her rescue, is deflated by the sexual dress and posing in the art.

Burroughs’ characters could be strong and resolute.  Their continuing adventures could be captivating and exciting.  Instead, they’ve become foils for rakish writing. The cover artwork samples included at the end of the book are beautiful works of art, suitable for this pulp style.  Dejah clearly wears nothing more than metal pasties, and the artwork at the end of the book show what Dejah would look like without the metal pasties.

Looking for a good book?  Read the original, Edgar Rice Burroughs Barsoom series, and pass this one by.