THE BOY WHO SAID NO: AN ESCAPE TO FREEDOM — Patti Sheehy 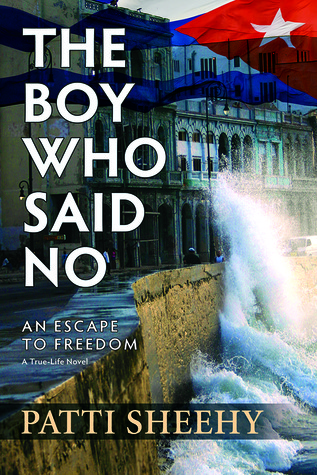 Once in awhile you come across a book that defines the term “page-turner,” or in which you realize the truth to the idea of a book that you simply can’t put down.  This is one of those books.

This is, as the book cover proclaims, “a true-life novel.”  Let’s be clear about that.  It’s a true story of young man, Frank Mederos’, escape from Cuba under the leadership of Fidel Castro.  The story is told by the boy himself (now a much older man), to Patti Sheehy who tells the story with grace and charm and page-turning action.  The story is, shall we say, somewhat ‘romaticisized.’  It is how Frank remembers it, along with a few things that he couldn’t possibly know for sure, but tells with confidence.

Frank was a young boy when Fidel Castro took power in Cuba.  He grew up seeing first-hand how communism was not the asnwer or the best thing for all Cubans.  His family instilled in him the virtues of a free society — something they all longed for.

Castro’s regime began a number of policies that affected Frank.  First was a teaching brigade, in which young men who had been in school were sent to the rural villages to teach the families there so that all Cubans could be educated.  Then came the draft to the Cuban military.  Because of his cleverness and intelligence, Frank is promoted to an elite force where it seems that he is the best of all the soldiers; one whom all the other soldiers look up.  His ocassional questioning of communisim and Castro’s regime put him at odds with his commanding officer, who looks for reasons to send Frank away as a dissident, but because Frank’s the best of the elite, this is hard for the commander to do.

Before being forced to join the military, Frank met young Magda…the love of his life.  Even as teens, with Frank in the military, they swear their undying love to one another.  When Magda’s parents decide that their family will leave Cuba for the United States (still possible, though not easy), Frank is determined to escape Cuba and met them there.  Magda’s father approves of Frank and approves of the plan.

Nearly half the book is filled with the planning and attempting to leave the island.  Because of Frank’s standing in the military, his disappearance is sure to cause a national man-hunt.  While we admire Frank’s resolve, here is where author Sheehy shines.  She takes on this journey, sharing every emotion with us — the highs, the lows, the anxiety, the love.  Frank Mederos and Patti Sheehy make this an adventure story.  And like any truly great story, there is a goal, there are obstacles, and there is love.

This book is uniquely written so that adults will enjoy it, but children as young as middle-schoolers will enjoy it as well ( and possibly…gasp…learn something!).

We never forget that Frank is telling the story, so we have some idea as to how it will turn out, but we are never quite sure what turn of events will happen to ensure this result, nor who will realize it with him.

But sadly I have to take half a star away… while the book reaches its natural conclusion, it does not end.  Even Patti Sheehy mentions this when she writes that there was so much more she wanted to know from Frank, who seems to smile and suggest that those questions might best be answered in the next book.  Of course I will want to read that book!  But I really don’t like books which don’t end.

Looking for a good book?  This is the book to read!  True-life history political romance.  You just can’t go wrong!

The Boy Who Said No: An Escape to Freedom

5 comments on “THE BOY WHO SAID NO: AN ESCAPE TO FREEDOM — Patti Sheehy”