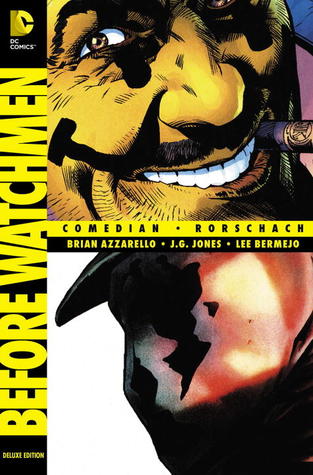 It’s been awhile since I reviewed two other Before Watchmen books, but it’s time to return to them, first with this one, Before Watchmen: Comedian/Rorschach.

The Comedian’s story is first.  Comedian is an interesting character.  Think Captain American with anger management issues and a lack of respect for authority and you get close to this character. Edward Blake, aka The Comedian, is a government sanctioned superhero in a time when superheroes are outlawed.  He is a friend to the Kennedy’s, working with and for John F. and Bobby, and spends a good deal of time in Vietnam.  There, he shows his true colors as a loose cannon, fighting the VC on the same terms as the VC fight … without rules or respect to ‘moral decency.’  This kind of behavior makes it hard for politicians to continue to support The Comedian.

Overall, this is a dark, bloody, and disturbing story.  The Comedian turns out to be a rather vile character, one we don’t care about or worse yet, don’t even respect.  While I recognize that protagonists don’t have to be likeable, it does seem strange to give this hero such less-than-hero characteristics.  While his appearance in the other books shows him to be angry and unpredictable, this makes him out to be so much worse.

The second story in the book is the story of Rorschach.  This is no less dark, bloody, and disturbing, but the difference is that Rorschach is a vigilante out trying to make a difference by attach street vermin on their level.  We also have someone, WalterJoseph Kovacs, aka Rorschach, who is quite the opposite of The Comedian.  Walter is a mild-mannered, quiet, loner who has trouble talking to the woman at the restaurant, but when he dons his rorschach mask and trench-coat and hat, he’s as threatening a figure as any in the superhero universe.

More vigilante than super-hero, Rorschach seems to get beaten up much more than he delivers, and it’s stamina and a fight to stay alive that keeps him going.  We don’t actually see him performing any deeds that might qualify him for a role in a superhero organization, which makes me wonder what the point to this story is, if it’s supposed to be a prequel to the Watchmen series, it doesn’t do much to set up the character as worthy of the organizational over-sight.  Neither character in this book appear to be deserving of inclusion in a superhero team.  Mostly this is depressing and dark.

Looking for a good book? Try one of the other Before Watchmen books if graphic novels are of interest — this one is just dark and depressing.